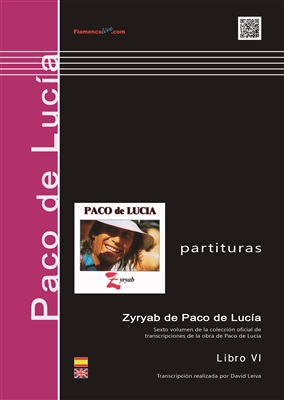 New
For the purchase of this article accumulate 10 points
Brand: XDL
Reference: LZYRYAB/L_ZYRYAB
45,00 €

Description
Zyryab
Paco de Lucía
A4, 240 pagesLanguage: Spanish and English,
Transcription by David Leiva
Flamenco-Live and David Leiva present the book of the grand master Paco de Lucía , ZYRYAB.
Zyryab, the creation that revolutionized flamenco of that period. Paco demonstrated that elements of Jazz, if used wisely, perfectly fit into flamenco. He connected to the very orthodox flamenco idiom new harmonies, melodies and rhythms, carefully chosen from Jazz, and giving flamenco a totally new flavour. In that very period the famous sextet already had a great trajectory and this connection and comprehension can be perfectly appreciated.
On the record there are great pieces, as Zyryab itself, one of the most famous creations of the maestro. But there is also a historical masterpiece, the bulería "Compadres”, composed and interpreted with another maestro, Manolo Sanlúcar. A piece fully transcribed, both voices included.
The eight transcriptions of Zyryab are written mainly for guitarists. There are also have been made adaptations of the mandolin parts interpreted by Carles Benavent and some parts of brass instruments played by Jorge Pardo, as well as the voice melodies of Pepe de Lucía and Potito. The piano parts of Chick Corea have not been transcribed since they are very spacious on the paper and this book mainly aims at guitarists.
The transcriptions are made for one, two or three guitars, depending on the piece, and show notes and tablature, with fingering for both hands as well as dynamics. Paco’s interpretation is as important as the composition itself, his mastery clearly reflected in this work.