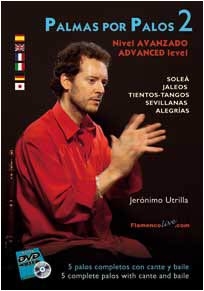 For the purchase of this article accumulate 10 points
Brand: XJU
Reference: DVDPALMAS2B/DVDPALMAS 2B
29,00 €

The "Palmas por Palos” series is a continuation and a complement of the "Learn and practice the palmas” though this one includes some new ideas and elements to study the Flamenco rhythm.

The main features are:

- The practice of complete Palos:

- It includes baile in some palos
Palmas of baile has a little difference with palmas of cante. The baile has in its structure some parts like escobillas, where the palmas must beat clearly the compás (flamenco meter) base. Thereby palmas is played consecutively in the base and in the 2nd voice.

- The palmas is played in all the palos since the beginning to the end and in two voices (palmas base and second voice). That is, as playing live with two palmeros (people who clap).

- This is the first time we perform muffled palmas.

-80 new palmas patterns which include base patterns, second voices and remates. The difficulty level of these new patterns is harder than the "Learn and practice the palmas” DVD one so it is advisable to study the most basic and essential patterns of the first volume before.

.- The palmas scores of all the palo’s are included. Every score points out, bar by bar, the palmas pattern used in the bases and in the second voice. There is no need for musical knowledge to read the palmas graphics as they are very visuals and have an easy comprehension.