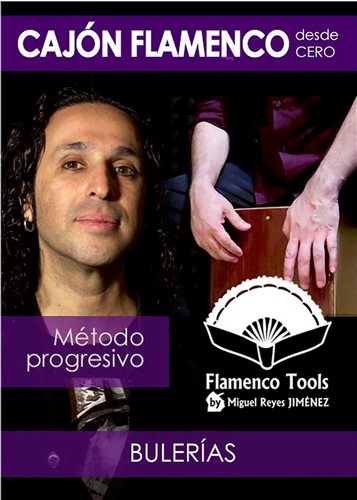 Course with exercises at different speeds to play a typical Bulerías rhythm.

Bulería rhythm video for beginner/ intermediate cajón players. This bulería rhythm uses more advanced techniques including a low pitched fingertip sound and a medium pitched nail sound, both of which can be used to accompany flamenco.

In this pattern, the rhythmic sense of the beat is binary. Instead of playing the typical 12 beat bulería compás, a half compás with 6-beats is shown. Playing a half compás is typical of bulería refrains, and this particular pattern could also be used to give a more modern feel to jaleos, a different but similar flamenco palo.

Initially, the rhythm is played and recorded at a very slow tempo (90 bpm). As the video progresses, the same rhythmic pattern increases to key flamenco speeds (120 bpm, 140 bpm, 152 bpm, 162 bpm, 176 bpm, 180 bpm) until reaching the speed of 190 bpm, a slow tempo of a typical bulería. Additionally, the video contains recordings of 200 bpm, 210 bpm, 220 bpm, and 230 bpm so that you can practice faster tempos more gradually and consistently.

The rhythmic examples include transcriptions, but it isn’t necessary to be able to read music. The exercises are performed for right-handed and left-handed players. In this way, the student can perceive the exercise as a mirror, and it will be easier to follow the movements. This video offers the fundamental tools for learning and applying flamenco compás via the cajón, an instrument that has become an invaluable partner in understanding both the compás and flamenco rhythms. A simple methodology is used to improve your understanding of flamenco and its language.