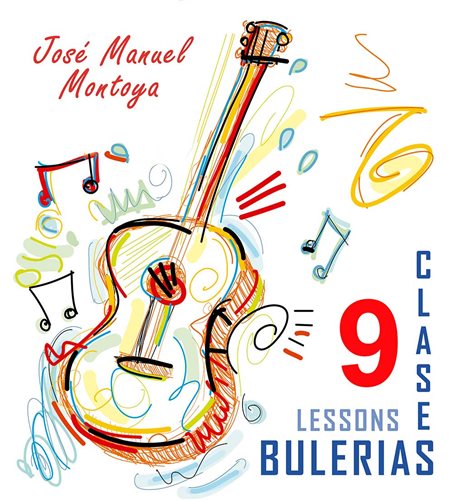 Bulerías course for Flamenco Guitar in 9 lessons, for those who have been playing the guitar for some time and know the flamenco guitar techniques.

The last Lesson is a review of everything studied through a concert theme called "Retama”, where the Cierres, rasgueos, and all the studied falsetas are applied, accompanied by clapping and cajón. There is a first part in which the guitar of José Manuel Montoya is heard, and a second part where the guitar begins for a very short time, and then the student is left alone with the percussion.

Lesson 1- Bulerías rhythmic base and rasgues Different rhythmic bases are studied with palmas, as well as three bulerías rasgueos.

Lesson 2 – Thumb technique falseta and legatos A falseta is worked where the most frequent figure is the eighth note, syncopated notes and counter time. The techniques highlighted in this falseta are thumb in the right hand, thumb, and ligados in the left hand.

Lesson 3 – Rasgueos / Strumming Some rasgueos with a basic rhythm format and others can be used as a rhythmic Cierrre entering with falseta or cante. You can also apply some of the strumming for accompaniment to the dance.

Lesson 4 – Thumb Falseta The thumb technique is worked as in class 2. The beginning of the falseta begins with rasgueo at beat 12 and ends at beat 9 to give way to the melody at beat 10. The most representative figure is the eighth note and in the last compás eighth notes are made using the thumb and index finger.

Lesson 6 – Alzapúa Falseta Dedicated to the alzapúa technique. Will have syncopated notes of quarter length with black duration with legato. The most prominent figure, as in other classes, is the eighth note. Pay attention to the final rasgueo that begins at beat 6 with sixteenth notes.

Lesson 7- Picado Falseta with three fingers  A technique not too usual in flamenco is explained, it consists of using the ring, middle and index fingers "Apoyado”.  In the first three measures the index, middle and ring arpeggio is worked in a fast way. In the last compás it is going to be legato by pressing the fourth string and legato in the fifth.

Lesson 8 – Closures In the first two cierres the picado technique is applied and in the remaining ones the thumb technique, highlighting the last one will be done with alzapúa and the figure of an eighth note triplet.