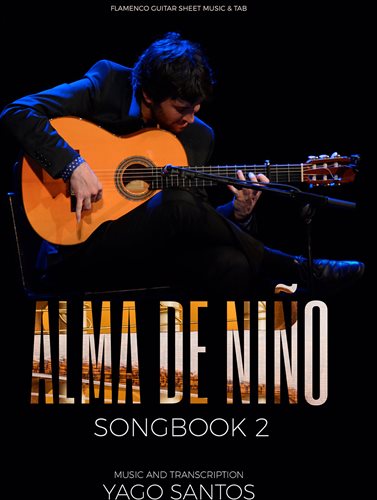 New
For the purchase of this article accumulate 4 points
Brand: YAGO
Reference: LALMA2
42,00 €


In this second scorebook, the most contemporary pieces of the album are presented.
Alma de Niño Songbook 2 is a daring and experimental work, composed for concert flamenco guitar, making use of alternative tunings or scordatura in all the flamenco touches that make it up. With the exception of the tuning used in the DADF # BE rondeña (created by maestro Ramón Montoya) all the tunings of Alma de Niño Songbook 2 are original creations by the composer.

The eight toques that Alma de Niño Songbook 2 contains correspond to the author's second period (2015-2020), a period that took place between Madrid and Boston (United States).
The interaction with musicians from the most diverse musical cultures greatly influenced the concept of this second book. In Yago's words "during my period in the United States I had the possibility to experiment with different styles of music and musicians from all over the world, which awakened in me a concern to investigate more in-depth the aesthetic possibilities of the guitar and flamenco music ”.
Among the works of Alma de Niño Songbook 2, the rumba Alma de Niño, which gives the album its title, and the bulería Origen, a work originally composed for guitar and orchestra, stand out as an arrangement for two guitars.
The idea of ​​this book is to record the experiences of the composer reflected through his music; moments and moods that are reflected in a wide collection of flamenco styles in which the lyricism of the melodies, the abundant left-hand ligatures, the personal arpeggio mechanisms and powerful "rasgueos" that emphasize the rhythmic character of the work stand out.
The transcriptions are made for one guitar even though some pieces contain improvised arrangements for two guitars.
The pieces are shown in musical notation and tablature with fingerings of both hands and dynamics.