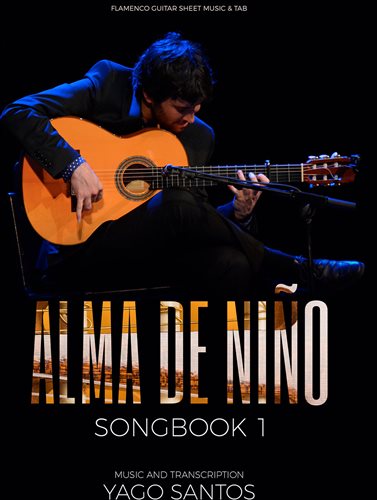 New
For the purchase of this article accumulate 4 points
Brand: YAGO
Reference: LALMA1
42,00 €

"Alma de Niño Songbook 1" is a deep and introspective work, composed for flamenco concert guitar, in which the composer reflects a marked personality in the different flamenco toques.

The six toques that Alma de Niño Songbook 1 contains correspond to the author's first period (2010-2015), among which are works such as the "Solea por bulería A Fali", composed in homage to his teacher Rafael Riqueni and the bulería "Generaciones", a nod to the new generation that is struggling to gain a foothold in the world of guitar.

A new toque that blends with the influences of the great masters.

All the toques in this scorebook are composed in the standard tuning with the exception of the "Solea por bulería A Fali",  which uses the DADGAE tuning.

This book contains experiences of the composer reflected through his music; moments and states of mind that are reflected in a wide collection of flamenco palos in which the lyricism of the melodies, the abundant left-hand ligatures, the personal arpeggio mechanisms, and powerful "rasgueos" that emphasize the rhythmic character of the work stand out.

The transcriptions are made for one guitar even though some pieces contain improvised arrangements for two guitars.